Banteay Srei or Banteay Srey (Khmer: ប្រាសាទបន្ទាយស្រី) is a 10th-century Cambodian temple dedicated to the Hindu god Shiva. Located in the area of Angkor, it lies near the hill of Phnom Dei, 25 km (16 mi) north-east of the main group of temples that once belonged to the medieval capitals of Yasodharapura and Angkor Thom. Banteay Srei is built largely of red sandstone,a medium that lends itself to the elaborate decorative wall carvings which are still observable today. The buildings themselves are miniature in scale,unusually so when measured by the standards of Angkorian construction. The sefactors have made the temple extremely popular with tourists, and have led to its being widely praised as a "precious gem", or the "jewel of Khmer art."

Consecrated on 22 April 967 A.D., BantãySrĕi was the only major temple at Angkor not built by a monarch; its construction is credited to the courtiers named Vishnukumara and Yajnavaraha: 367 / Yajñavarāha (modern Khmer: យជ្ញវរាហៈ), who served as a counsellor to king Rajendravarman II (modern Khmer: ព្រះបាទរាជេន្រ្ទវរ្ម័ន). The foundational stela says that Yajnavaraha, grandson of king Harsavarman I, 117 was a scholar and philanthropist who helped those who suffered from illness, injustice, or poverty. His pupil was the future king Jayavarman V (r. 968- ca. 1001). Originally, the temple was surrounded by a town called Īśvarapura.

Yajñavarāha's temple was primarily dedicated to the Hindu god Śiva. Originally, it carried the name Tribhuvanamaheśvara—great lord of the threefold world—in reference to the Shaivite linga that served as its central religious image. However, the temple buildings appear to be divided along the central east–west axis between those buildings located south of the axis, which are devoted to Śiva, and those north of the axis, which are devoted to Viṣṇu. 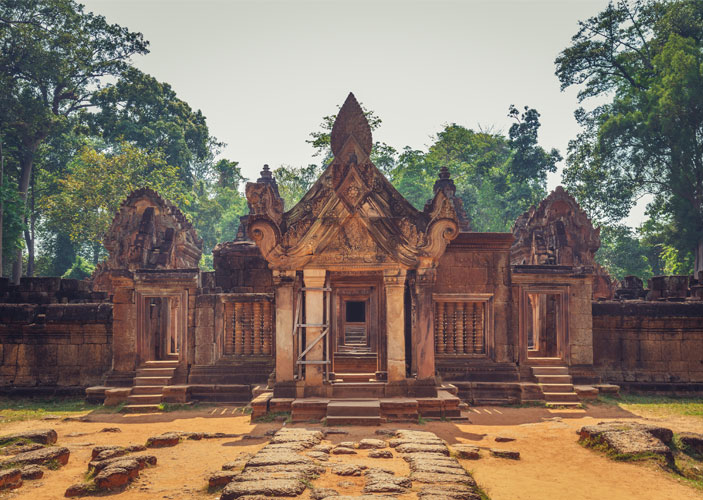